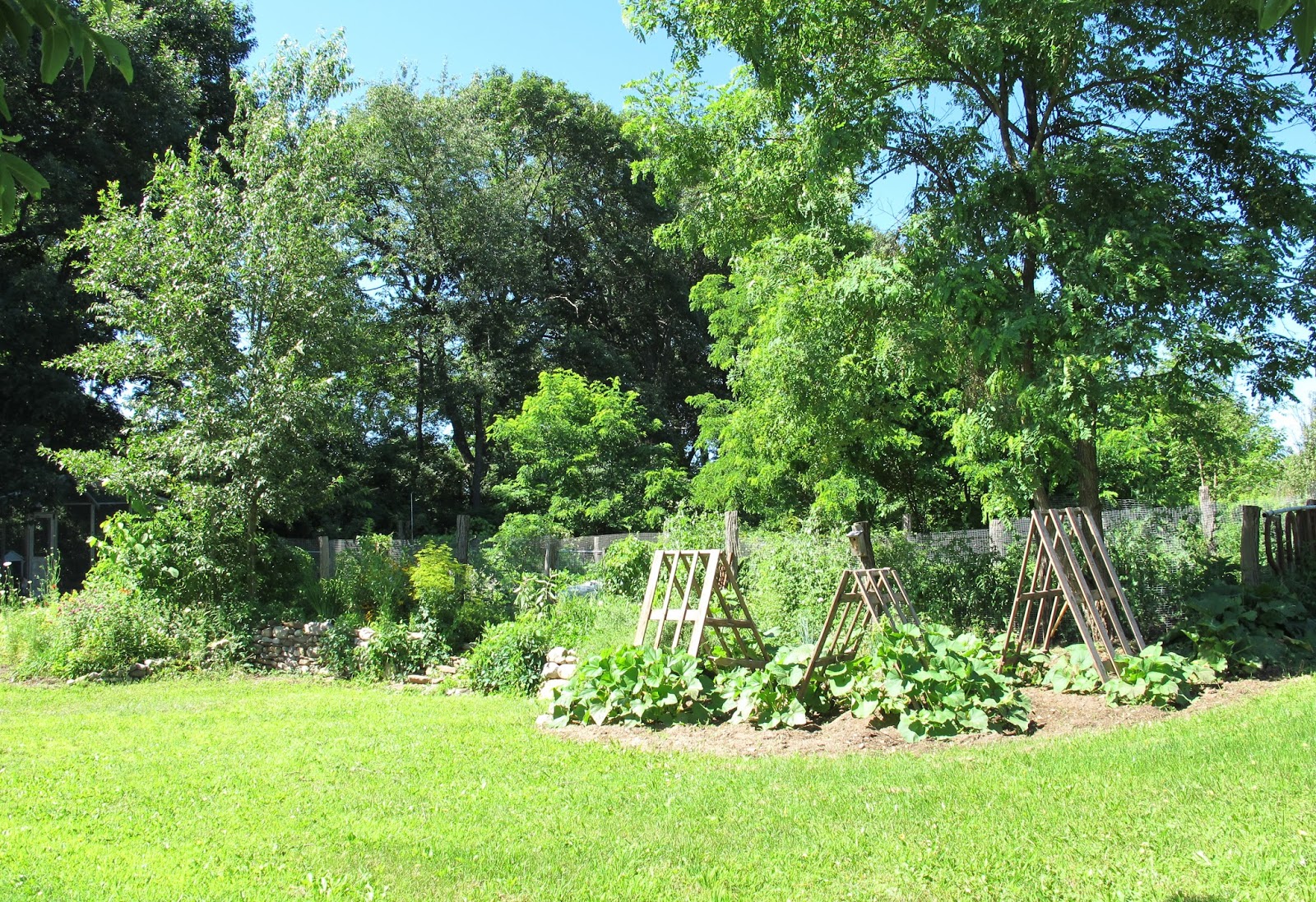 I always mean to post a little more about the garden for all of those who are interested.  Well...finally Ben took a whole bunch of photos for me share.  Yay! 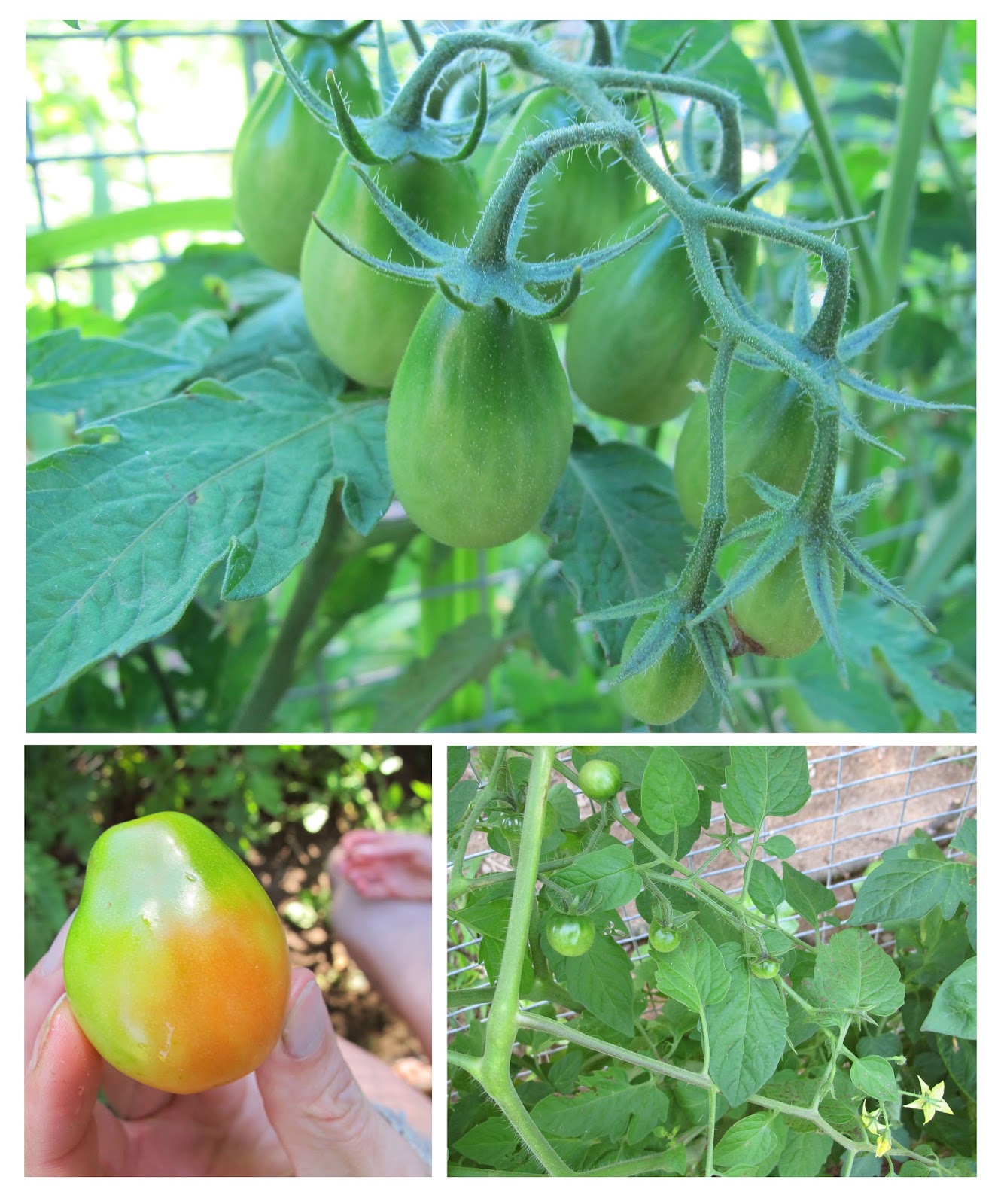 We've been getting lots of rain again this summer and everything is booming!  The tomatoes have septoria leaf spot again this year, but they are still growing fruit and I planted way more plants than is reasonable (many are transplanted volunteers, which are always more robust than the others), so I'm sure I'll have a fine crop nonetheless.  Look...my first reddening tomato!  Exciting!

On one side of the rock wall next to the garden I planted wildflower seeds.  I noticed something coming up this spring while weeding and left it, not knowing what it was.  Well...now I know!  A mix between traditional black eyed susans and these wow factor black eyed susan type flowers (anyone know the name?).  Beautiful!

Only one peach tree survived the winter, so I bought a new, more tried and true one from the nursery in town.  Unlike my old one, this tree produces full sized peaches!  My other peach tree has yet to blossom...we'll see if ever does! 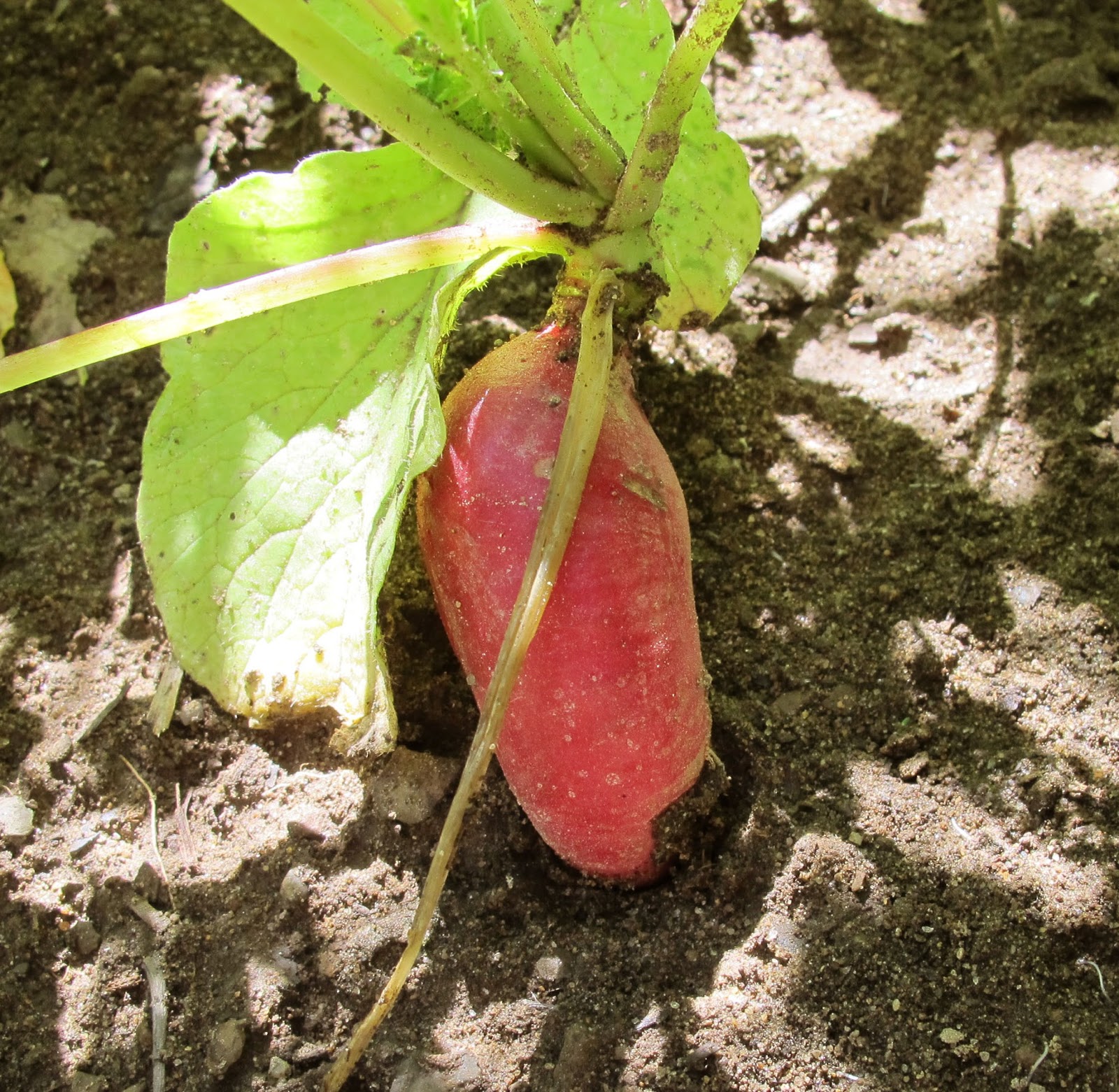 Radishes are bored with being underground.  They like to pop up and see what all the fuss is about on the surface.  Well...what say you, Little Radish, of the world of the light? 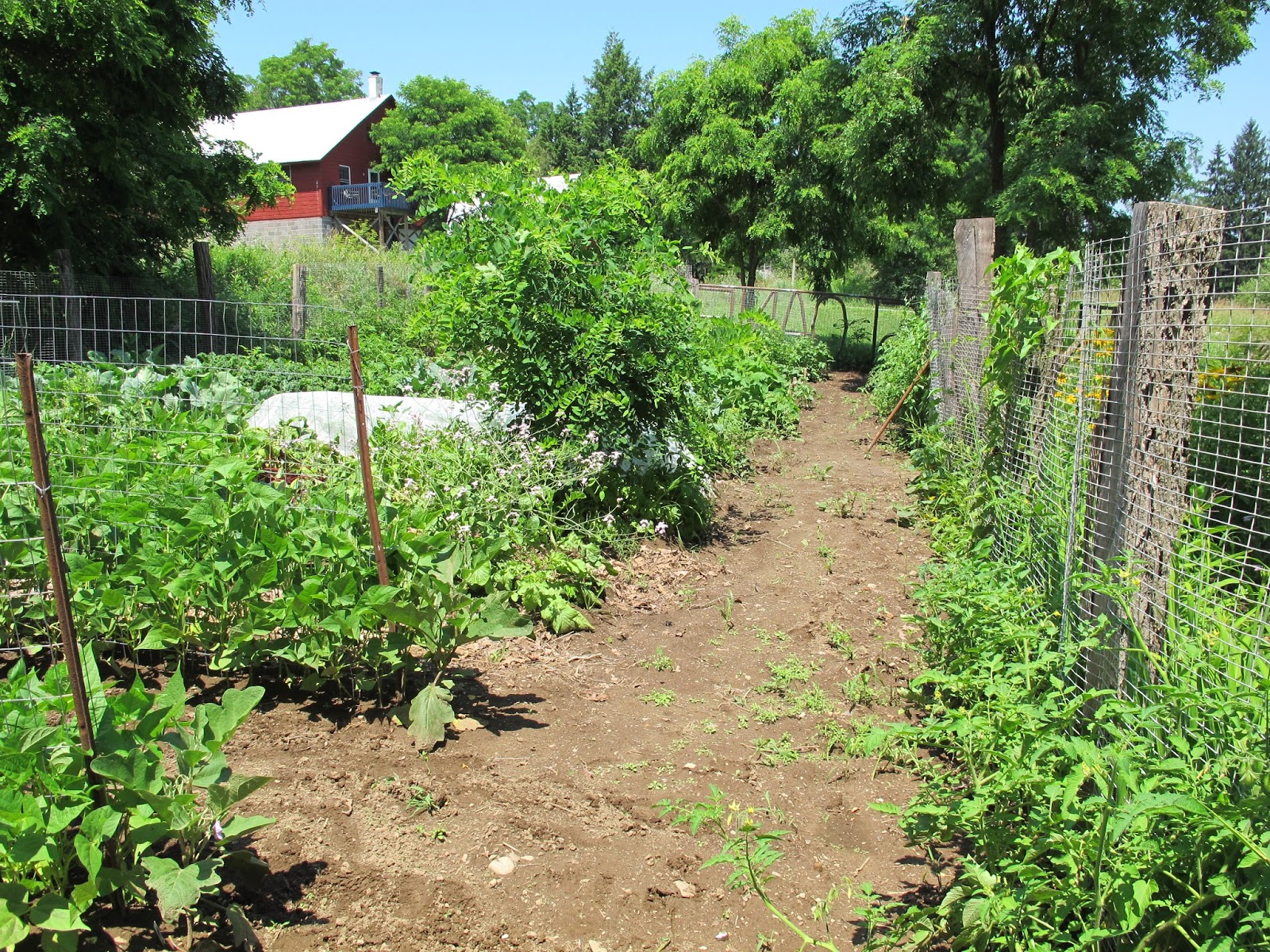 Last year I made my main garden path very narrow and as the season went on, it grew narrower still.  This year I smartened up and made it fairly wide.  The big lump of green in the middle of the photo is a small tree that I can't bring myself to chop down.  I trimmed it way down and planted lettuce around it, which enjoys occasional shade, especially in the heat of the summer. 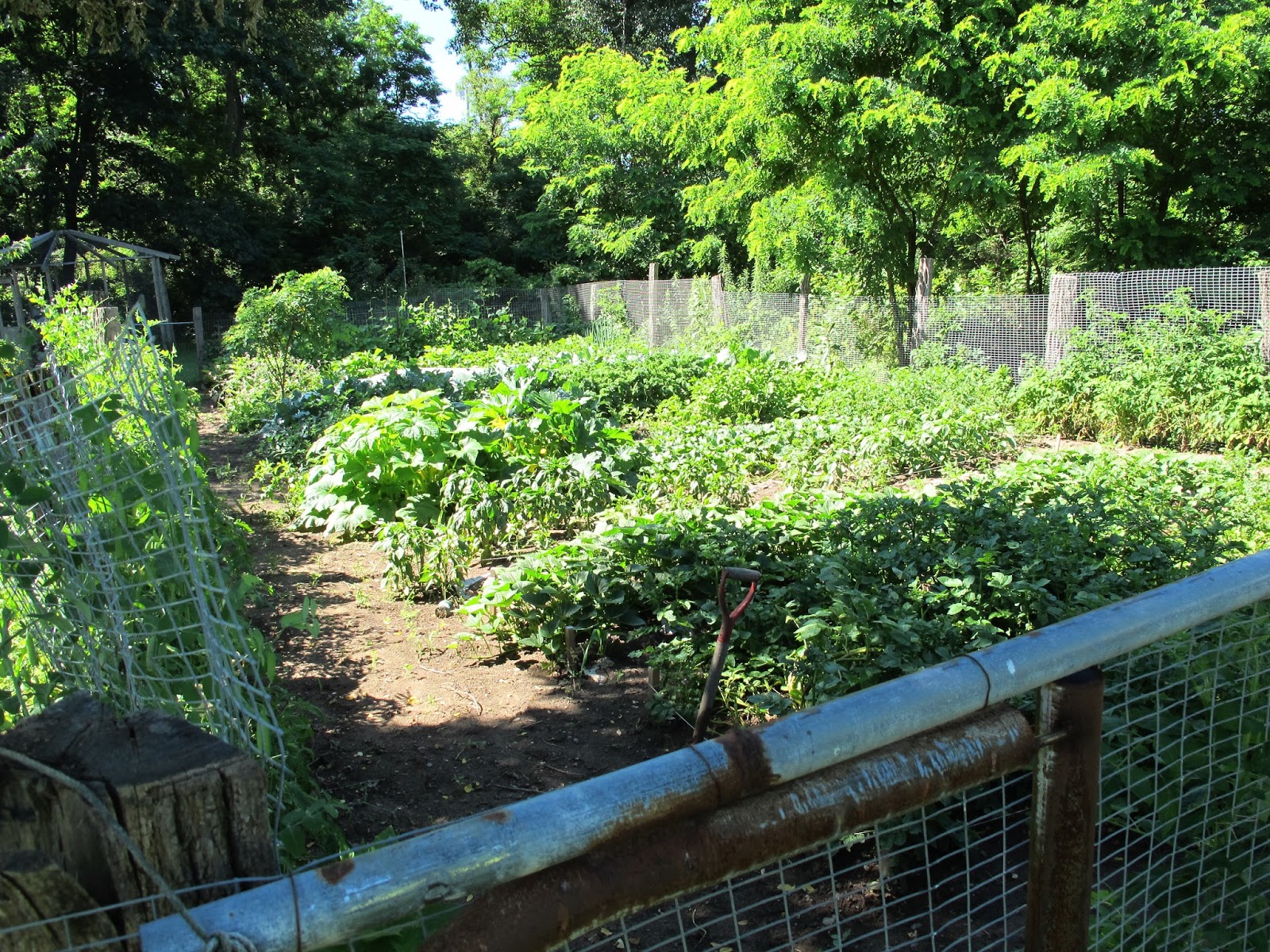 This wire mesh protects my tender plants from Mr. Wood Chuck (aka Mr. Goundhog) and his family.  He tried to dig under it a few times this spring, but the wire is buried 6 inches or so and he gave up.  Sorry Mister!  I guess it's milkweed and clover for you! 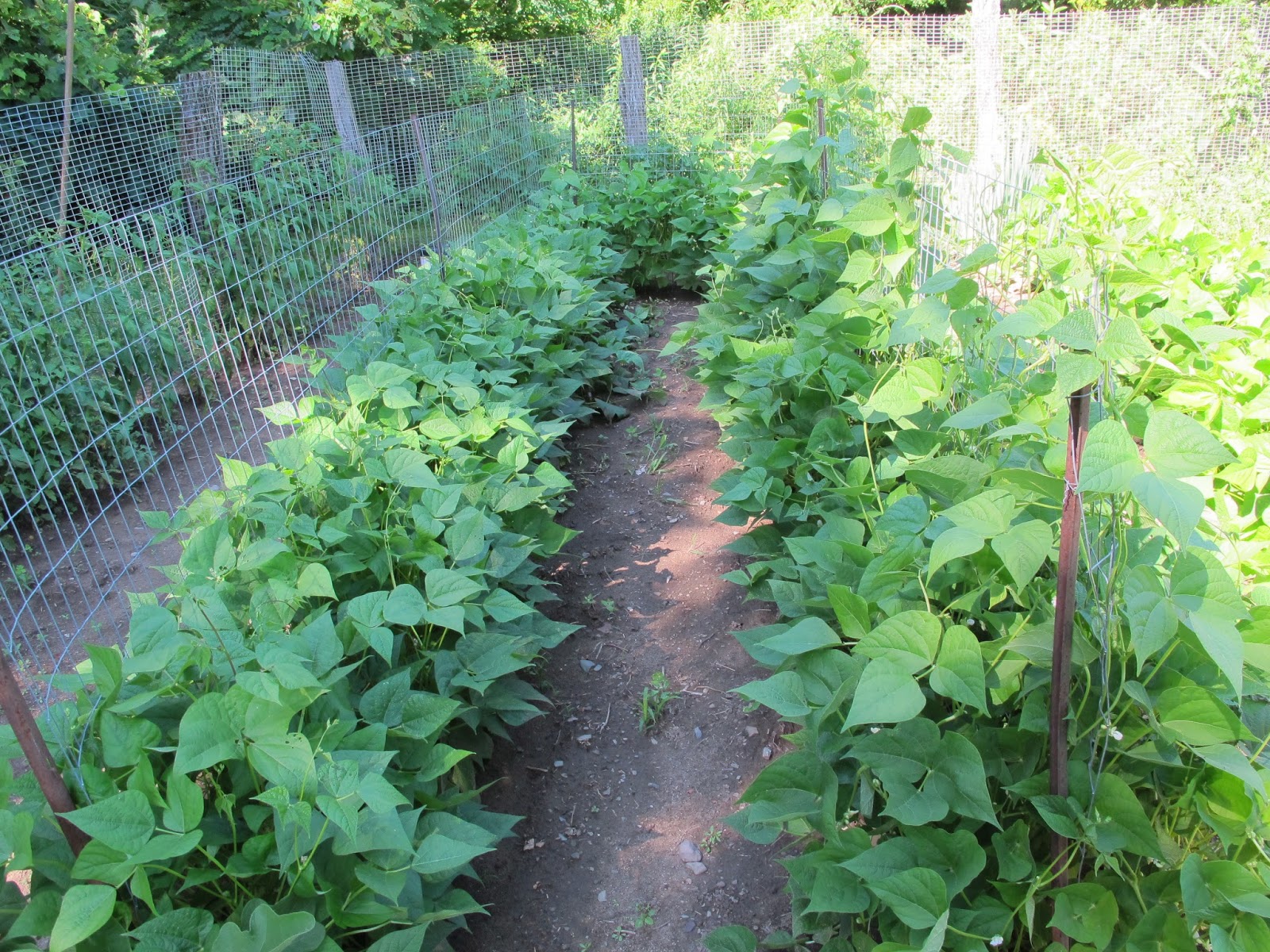 Many gardeners think that growing dry beans can be a waste of garden space, but being a vegetarian, I eat a LOT of beans.  When I plan my garden out in the winter, I think about what we eat most and use that as my guide of what to plant (makes sense of course).  We're at the point now where about half the food we eat comes from the garden or my dad's farm (dairy - I've been making butter, yogurt and ricotta so far - and sweet corn) and I'm always aiming to increase that, especially now that we've started a family. 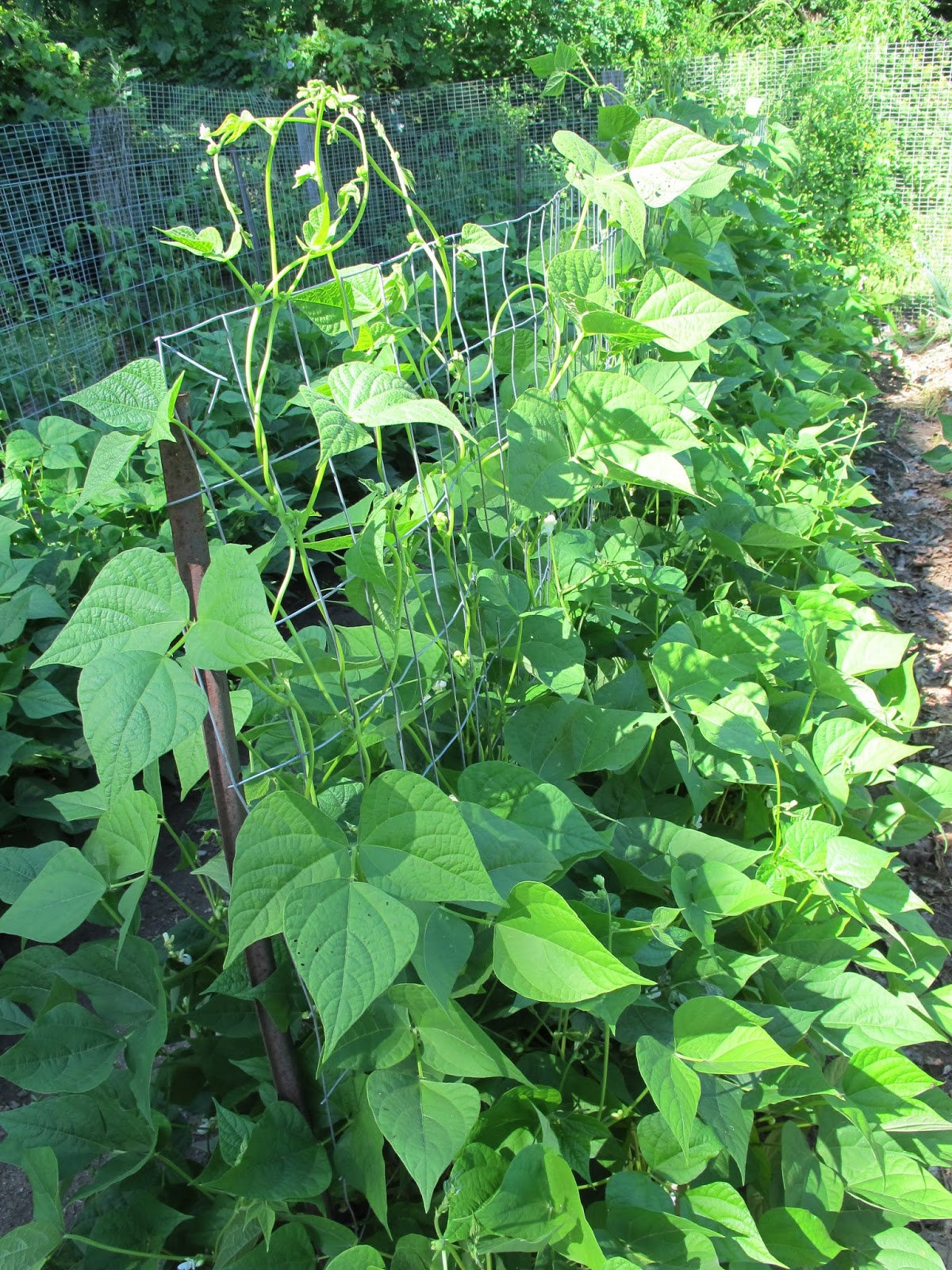 Last year I planted the beans on the ground, not knowing they were climbing beans (I just bought dry beans at the grocery store and planted them, black, pinto, and kidney).  This year I built a fence for them to climb.  It's much better this way! 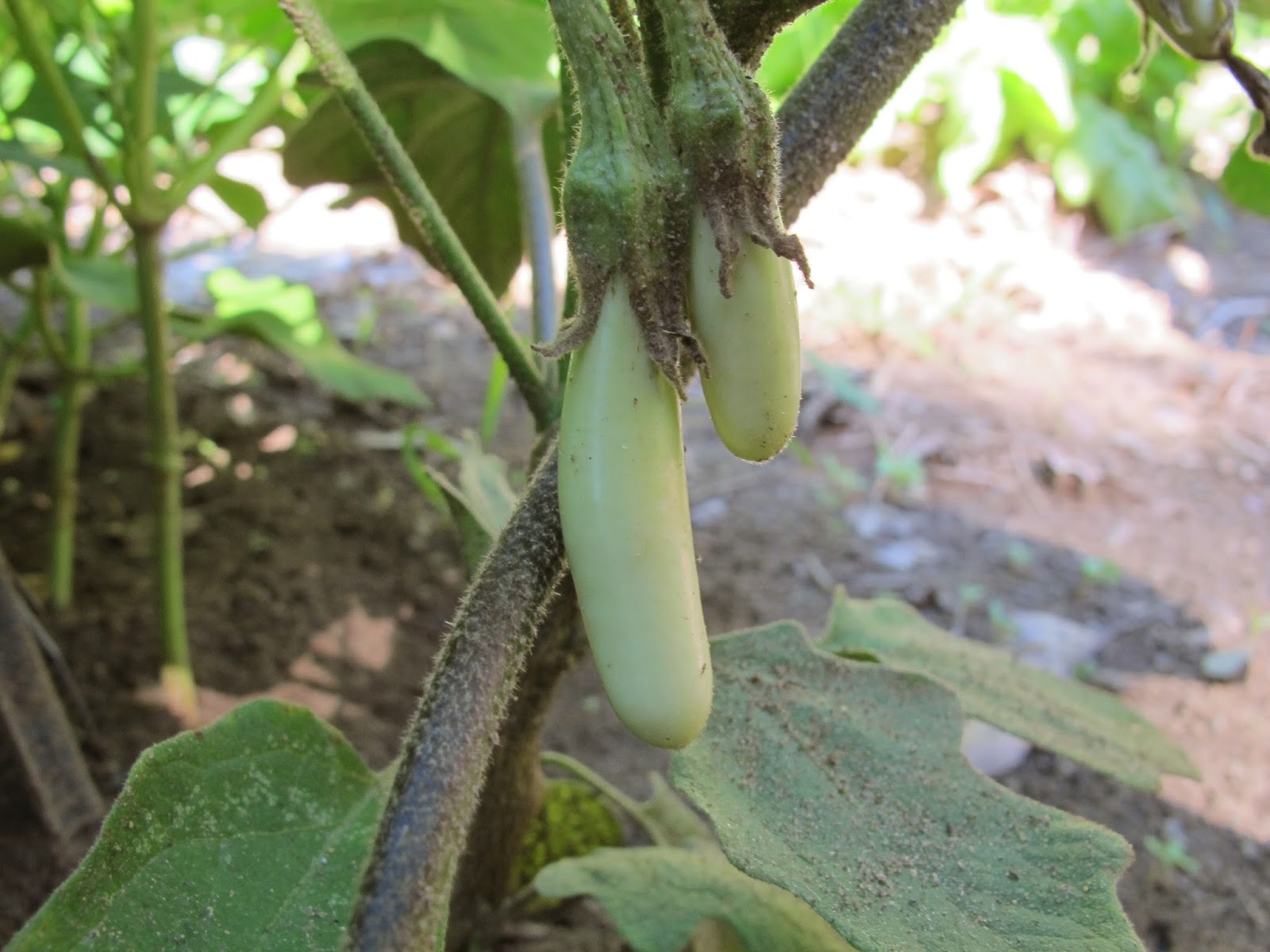 And two white eggplant plants live nearby.  I'm not a huge fan of eggplant, but I like it in dried chip form and as eggplant parm, so two plants should do nicely. 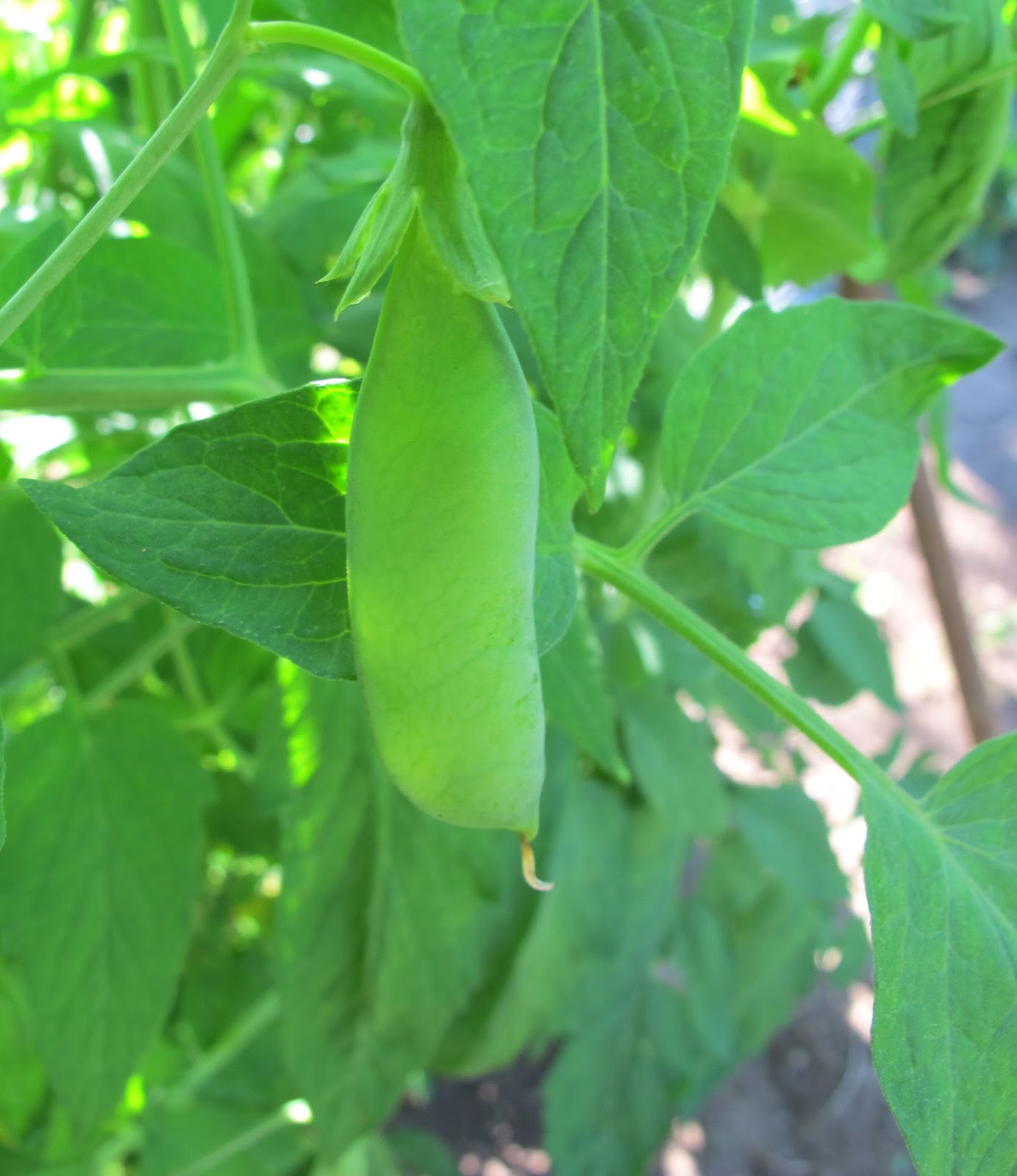 I planted tons of peas this spring...but made the mistake of planting them on the outside of the garden fence (I was planning tomatoes for the inside).  I hadn't seen Mr. Wood Chuck at all last year and so thought I was safe.  Nope.  He ate most of them.  The few plants that escaped are really robust and producing lots of peas.  Now I just have to wait for them to get nice and plump and ready to shell! 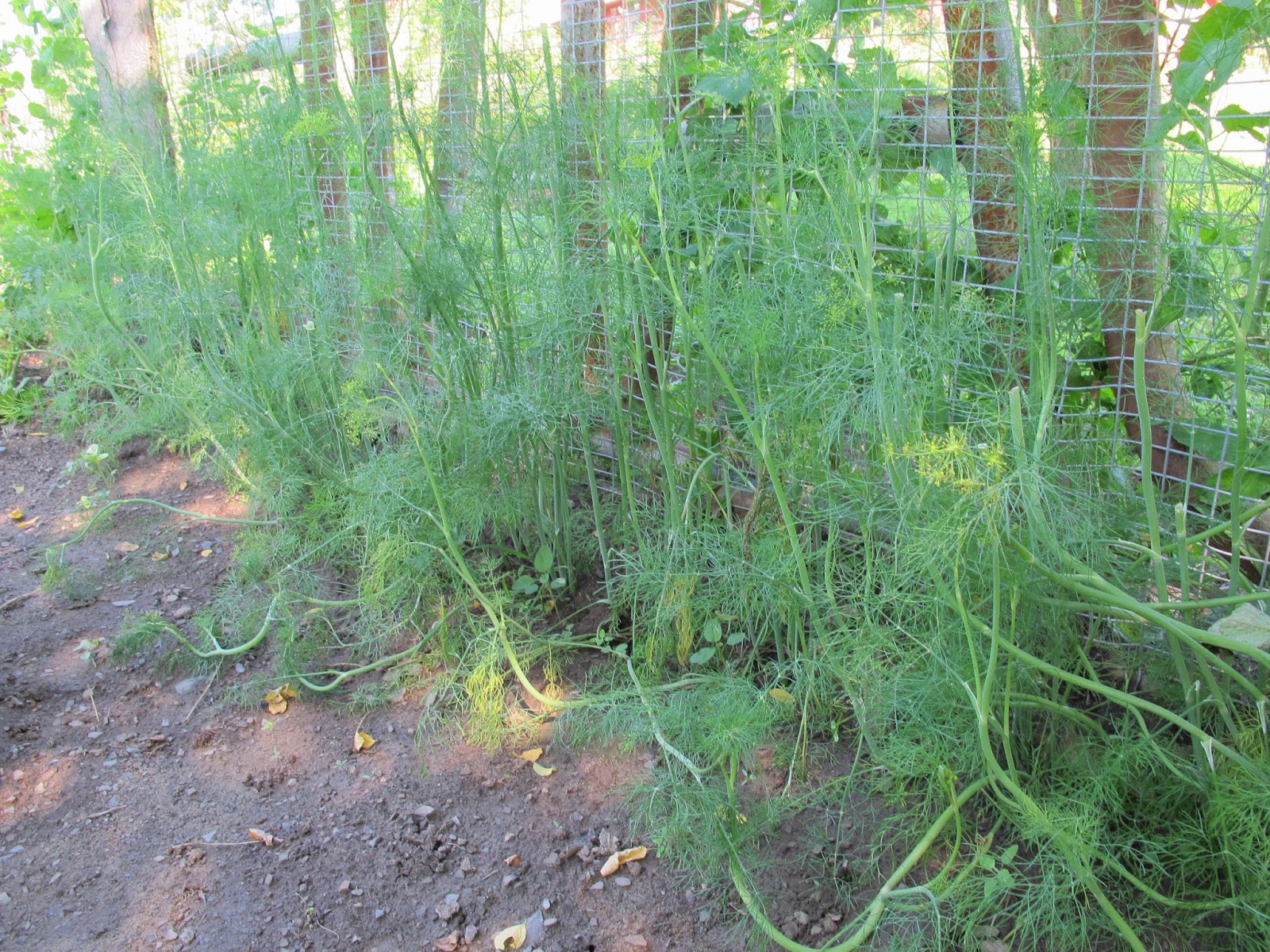 Dill.  I kept planting in the wrong spots the last two years...but not this year!  I've already dried a whole bunch and the rest are waiting for pickles.  Yum! 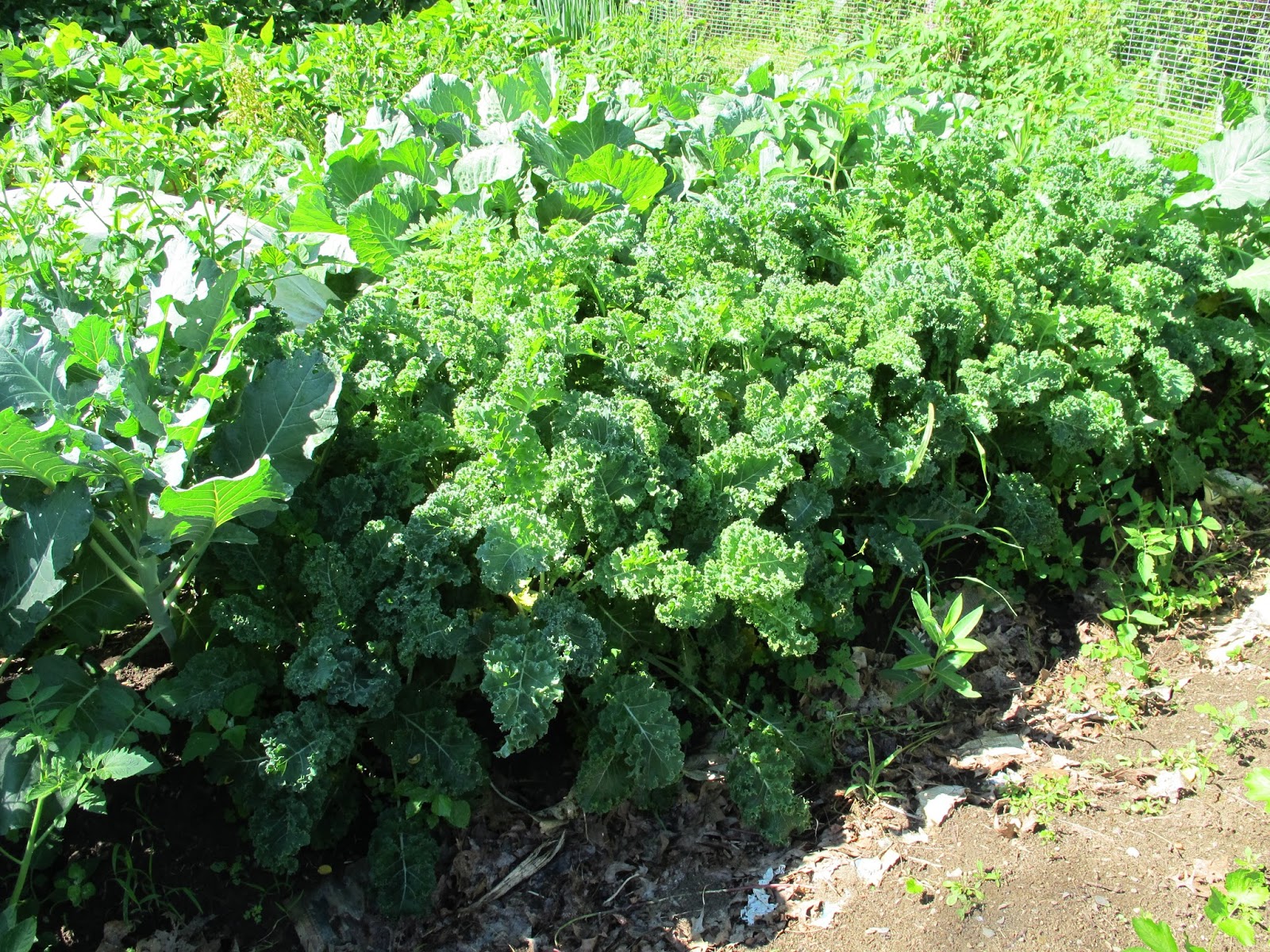 Kale and Collards...two of the best garden plants you can grow in my opinion.  You can plant them as soon as the ground thaws in spring (they like cold weather).  You can start harvesting in a month or so after planting and they just keep growing all season, whether you pick them hard or light and will keep producing until December in zone 5 before the cold finally conks them out.  The leaves on both plants are large, so picking and prepping takes little time, and they freeze really well, blanched or raw.  They are one of the most nutritious foods you can eat.  In contrast to spinach, which is very healthy of course, but not as easy to grow.  Spinach only likes cold weather (it bolts as soon as it warms up), so you plant it early and it's done by early July.  Fall plantings are difficult in zone 5 because it doesn't germinate in warm soil.   The leaves are also smaller than kale or collards and so picking takes more time and the harvest is always smaller than I ever hope it will be.  I love spinach, but for cooked dishes, we often mix or substitute with kale, since kale is so much more bountiful.  I've also just discovered beet greens, which I think makes a much better substitute than kale...it's taste of texture being a lot more similar to spinach.  The leaves are nice and big and if you're growing beets anyway, then the greens are merely a fortunate byproduct. 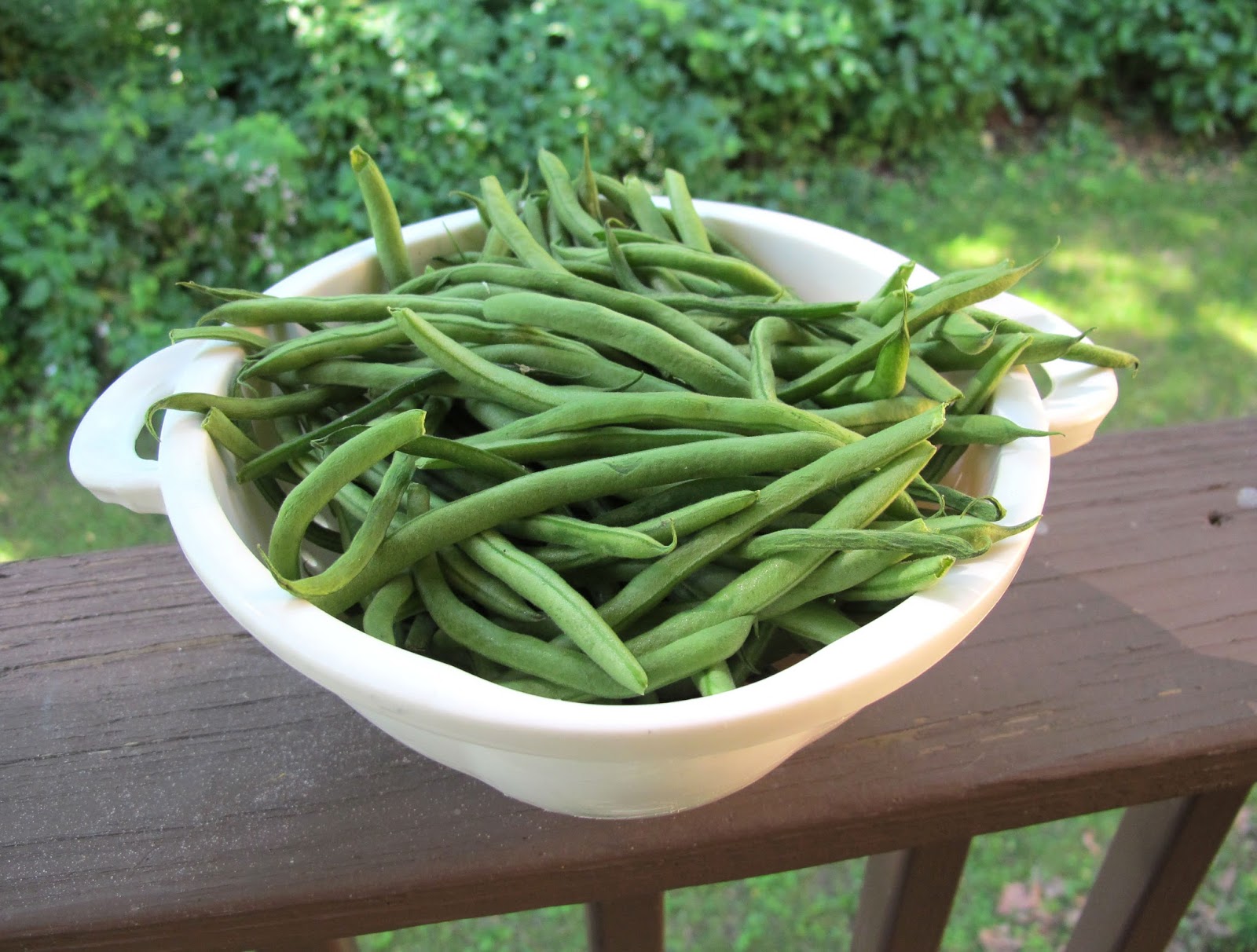 The green bean plants are heavily loaded right now and Ben has been sauteing then and I've been experimenting with drying them into crispy green bean treats (blanch and freeze, then while frozen, coat in oil and salt and dehydrate for a few hours, then pop in the oven at 170 for a while more and the result is a shriveled and ugly, but very crispy, salty, and yummy snack!  The texture is kind of like a crispier cheese puff) 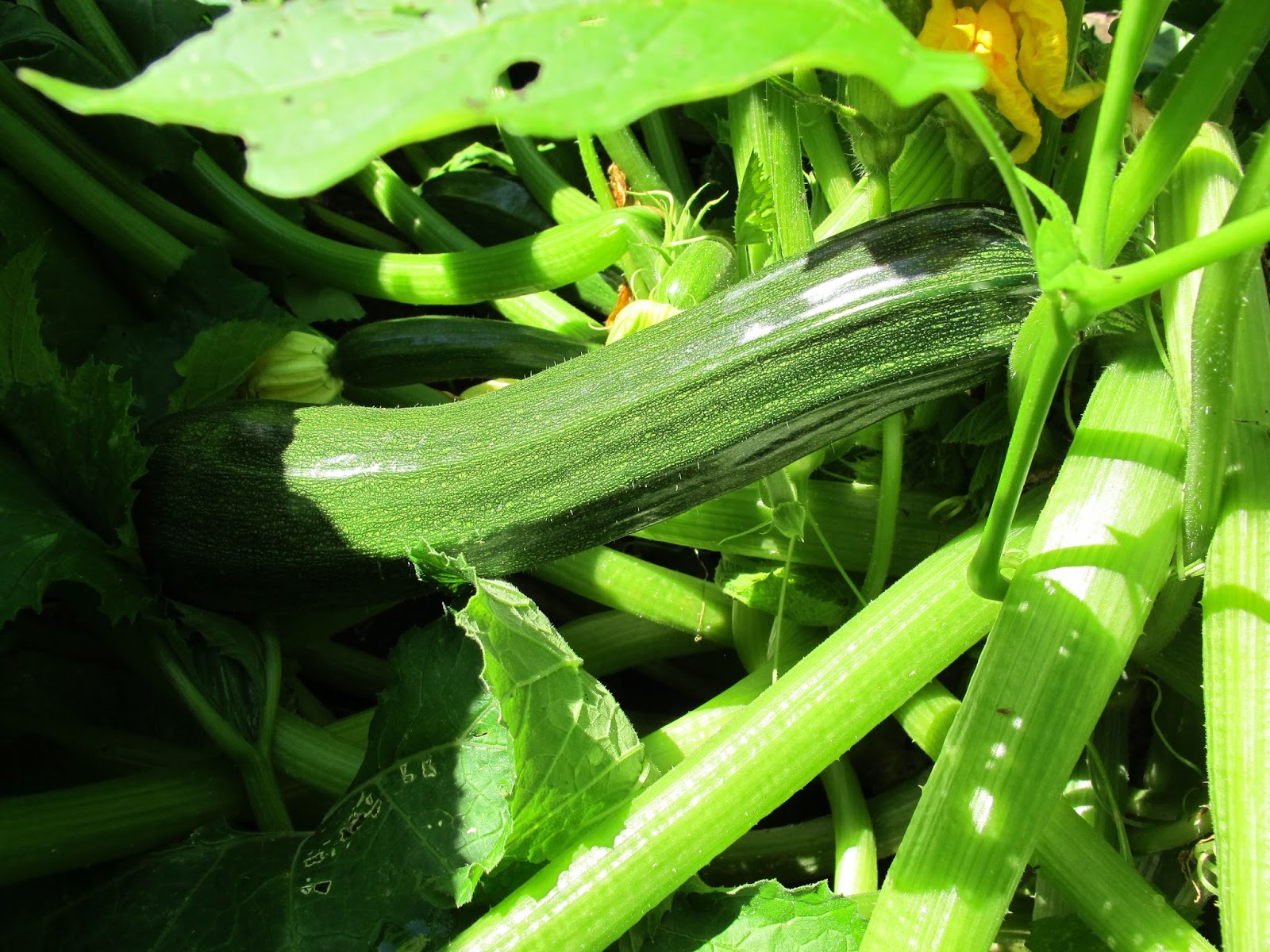 The zuchinni and yellow squash are pumping out the produce and I've been experimenting with drying those too, but less successfully.  I have one more idea up my sleeve...wish me luck! 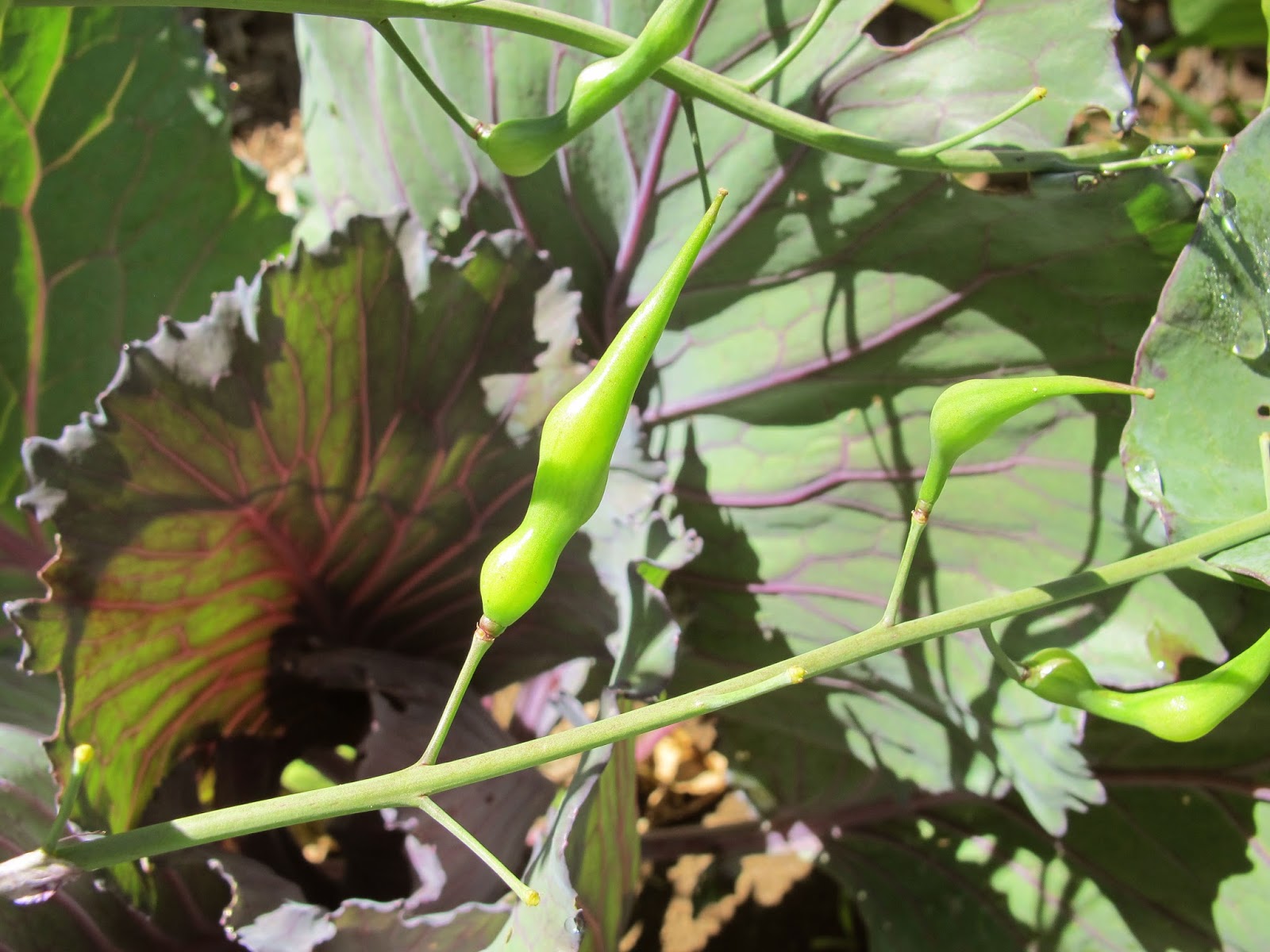 These are radish seed pods.  I love radishes, but they are so spicy I can never seem to polish off my crop and then they go to seed.  I had radishes popping up all over this spring!  Anyone know of a variety that isn't so spicy? 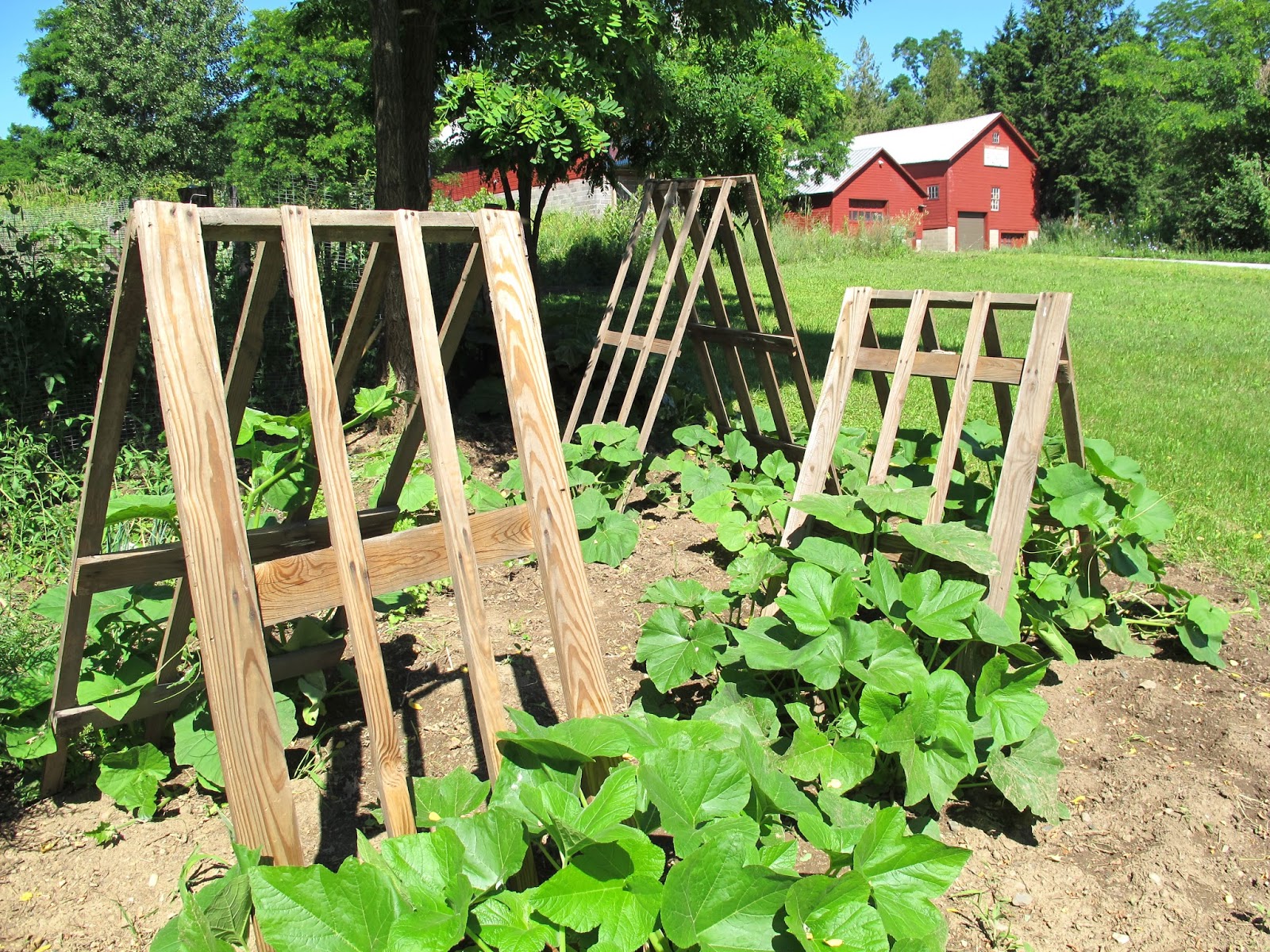 Ben took these photos last week and the difference between then a now is astounding!  Many of these squash and pumpkin plants have reached the tops of their trellises already!  I have these planted in such a small space, I'm experimenting with going vertical...even with heavier fruited plants.  We'll what happens! 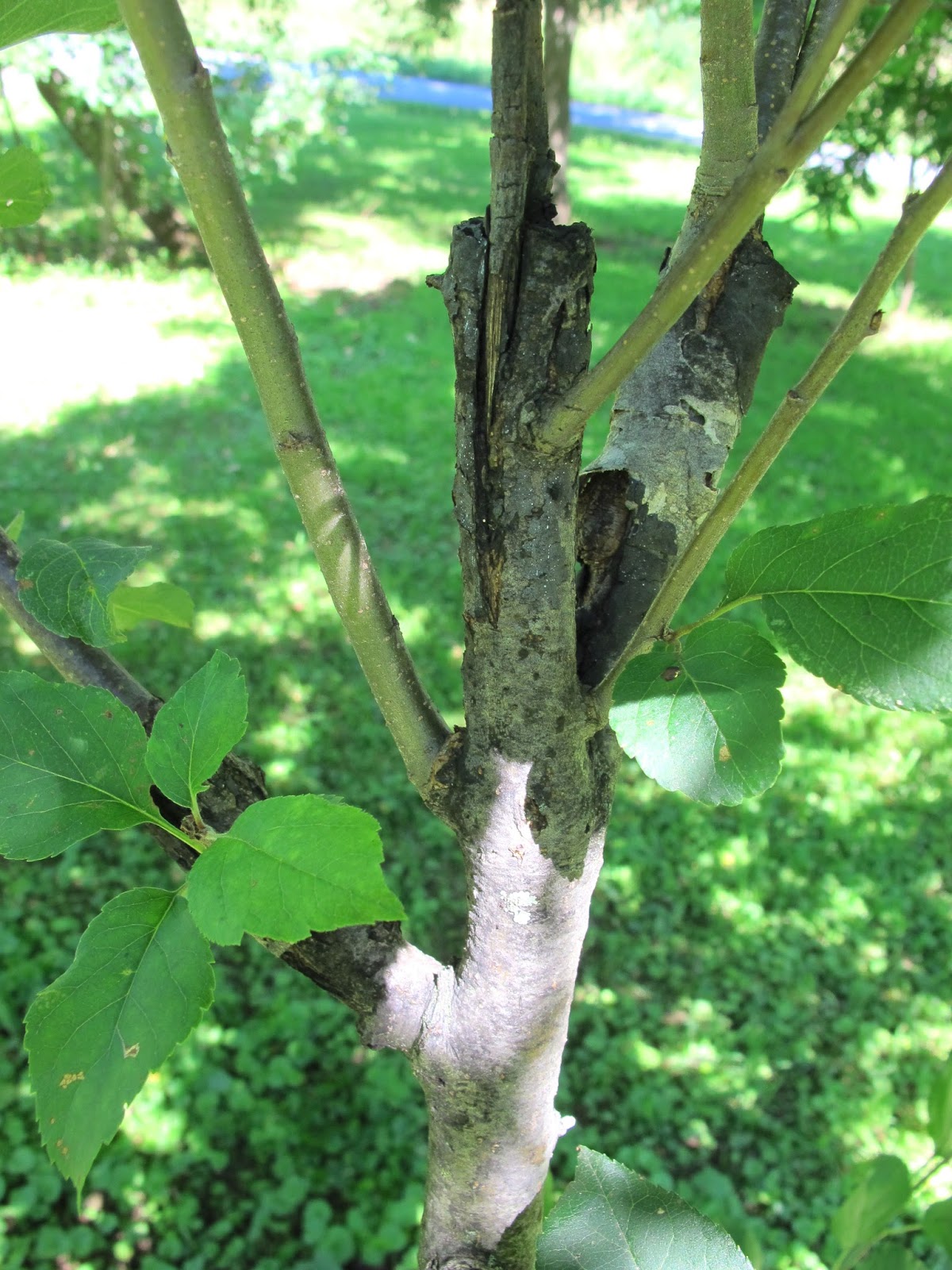 And lastly here's the progress on my grafted apple tree.  So far so good!  The branches are growing and popping out leaves!  Three varieties on one tree...not bad.  I may try to graft more onto it next spring.

I hope you enjoyed my long winded garden tour!!  If you liked it, let me know and I'll post more of them!  :)
Posted by Vintage by Crystal at 9:15 AM

Loved it!
Don't garden myself but so admire those who do.

What a gorgeous garden! Fantastic.
Carmen

love your garden. Im so clueless and lazy in the gardening dept. I keep telling my hubby that he should take up gardening... I dont think he wants too... oh well, I am super thankful to all the farmers all around me that have little stands out so for very cheap I can buy fresh veggies all season long.. but I would love to grow big beautiful gardens! Im lucky that the flowers that I have bloom! lol!
have a great week!
xoxo
vivian 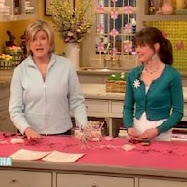 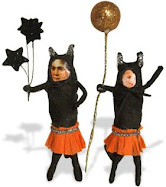